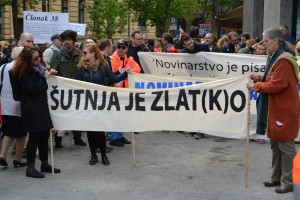 Journalists and activists protest the government’s media crackdown in Zagreb on May 3, 2016. The sign reads, “Silence is Golden.” “Zlat(k)o is a play on words, referring to Minister of Culture Zlatko Hasanbegovic (photo: Branko Radovanović, Creative Commons).

In response to a crackdown on media freedom, a coalition of NGOs including GONG (a Coalition member), Center for Peace Studies, Human Rights House Zagreb, Canadian Journalists for Free Expression and Blueprint for Free Speech has launched a public campaign to defend freedom of expression.

Public funding for certain non-profit media and NGOs is expected to be dramatically cut, the government has meddled in media staffing and programing decisions, and the Expert Committee for Non-Profit Media has been disbanded. 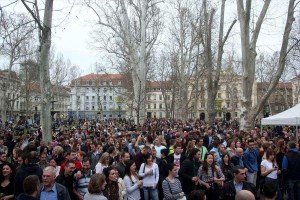 cultural affairs. One month after assuming office, Hasanbegović announced: “my position…is that there is no need to continue giving grants to any non-profit media outlet within the Culture Ministry policy.”

Your ticket for the: Activists in Croatia Unite to Defend Media Freedoms