by Dino Jahic
Center for Investigative Journalism of Serbia (CINS)

Anti-corruption activists in Moldova are urging authorities to stop the illegal collection of “informal” taxes in the education system and allow citizens to report corruption safer and more effectively, including by granting legal protections to all whistleblowers. 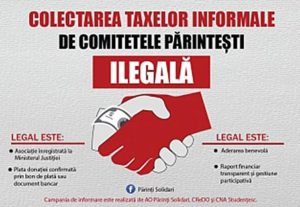 Short of being protected for making a report, it is difficult for people even to disclose corruption and other misconduct in schools. The Ministry of Education’s reporting hotline works poorly, if at all. It redirects calls to the National Anti-Corruption Center, which specializes in preventing corruption rather than dealing with specific cases.

The situation has gotten to the point that Solidarity Parents, a grassroots NGO, has set up its own system for parents and others to report suspicious activities via their Facebook page or e-mail – parinti.solidari@gmail.com

Solidarity Parents has joined the Resource Center for Human Rights (CReDO) and Student National Anticorruption Center to build a major campaign to stop the abusive practice of levying illegal school taxes. At a press conference last September, the three NGOs warned about widespread corruption in the education system. They called on Parents’ Committees to comply with the law and urged parents and teachers to report illegal tax-collection.

To date, no official reforms to fix the problem have been introduced.

Informal taxes in schools are collected annually by Parents’ Committees, but the basis for this practice is unclear. There is also a lack of transparency in how the money is spent.

Olga Bitca of CReDO, a member of the Southeast Europe Whistleblower Coalition, said these fees have increased over the years. It began with small amounts collected from parents to help buy books, but eventually grew to pay for renovations. There appears to be no formal system for setting priorities or controlling how the money is spent, she said, other than the role of the Parents’ Committees.

At the same time, most institutions have turned a blind eye to the problem. The Ministry of Education and some local agencies have responded occasionally, Bitca said, “but their reaction is still not convincing us that there is political will to stop illicit financial flows.” 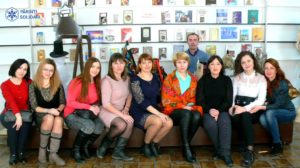 Bitca said that when parents decide not to pay the “taxes,” their entire family can experience retaliation. Parents and children alike have been intimidated and harassed. Bitca’s own family has suffered. “My daughter was coming home in tears every day. This was an awful experience. We had to changed schools, which is the only solution in cases of harassment.”

Ala Revenco of Solidarity Parents said the purpose of Parents’ Committees should not be to raise money but to support education system and supervise public funding for schools. “Contributions made by parents should be voluntary and transparent,” she said, “and the goods purchased by parents should be included in a register.”

For example, Revenco said, a kindergarten in the capital of Chisinau collects 1 million lei (€49,000) annually, while in some institutions the sums are twice as high or even higher.

Bitca said these funds essentially go into a black box. “Donations should be confirmed by a check or a banking document. Transparent financial reports should be worked out.”

Activists have raised other concerns. At the September press conference, Sanda Sandu of the Student National Anticorruption Center said corruption assumes different forms within universities, including favoritism, nepotism and an obligation for students to buy textbooks from teachers.

“Students are afraid to report cases of corruption,” Sandu said, “so it is important to ensure the anonymity of whistleblowers. Otherwise revenge will be taken against them.”

Moldova has taken some initial steps to establish whistleblower rights and systems, though progress has not been steady.

A Framework Regulation on Whistleblowers was enacted in 2013 that seeks to provide disclosure channels for public employees and protect them from retaliation. It does not apply to people who work for private companies or to citizens. Parents, therefore, are not covered.

Passed in 2017, the Law on Integrity includes broader protections but does not apply specifically to parents. As of now, protections are limited and the government is not known to track the numbers or the outcome of whistleblower cases.

Bitca of CReDO is among the civil society leaders pushing for a comprehensive whistleblower protection law. The National Anti-Corruption Center recently developed a draft law in cooperation with the UN and international experts, including Mark Worth of the Southeast Europe Coalition on Whistleblower Protection. This is the third attempt to pass a law in recent years.

Bitca said many whistleblowers have been fired, harassed and intimidated. Some of these cases are profiled in the documentary, Whistleblowers on Their Own. Still, she said citizens generally appear more willing to report corruption, though they need safe and reliable channels, including anonymous routes.

Your ticket for the: Failing grade: Campaigners fight to stop suspicious school taxes in Moldova