by Mark Worth
Coalition Co-coordinator

“I do not want to be a part of this farce anymore,” he told Le Monde journalist Hugo Lemonier. 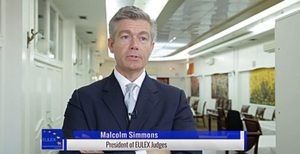 Simmons, a former UK lawyer, did not provide any details on his allegations to the French newspaper. To this day, he is not known to have provided any details to anyone on his unsubstantiated claims. Former colleagues say he has retreated to his home in Maldives.

“We continue to call on Mr Simmons to provide data and evidence, but so far he has refused to do so,” said Maja Kocijančič, spokesperson for EU Foreign Affairs and Security Policy.

Repeated attempts to reach Simmons via phone, e-mail and social media have been unsuccessful. A phone number he provided to the EU is not his own, but rather belongs to an EU office. He has taken down his LinkedIn profile.

Simmons’ disappearance is the latest twist in a still-developing story that began in November.

As first reported by the Southeast Europe Coalition on Whistleblower Protection, Simmons was elevated in 2014 to President of Judges at the EU’s rule-of-law mission in Priština – known as EULEX – without having the required credentials to serve as an international judge. Simmons also worked as a war crimes judge in Bosnia and Herzegovina, also without the mandatory qualifications.

UN rules require international judges to have at least five years’ prior experience as a judge in their home country. The Coalition discovered Simmons had never worked as a judge or barrister in the UK, and that his solicitor certificate expired in 2000.

It was an open secret for many years within EULEX and in Bosnia that Simmons was not professionally qualified to be an international judge. Yet he held various judicial positions since his original secondment by the UK Foreign and Commonwealth Office (FCO) in 2008. Official efforts to probe his background did not begin until 2017.

Having learned through back-channels that the Coalition’s article about his background soon would be published, Simmons attempted to deflect attention away from the impending scandal. Hours before the Coalition story broke, he contacted a junior reporter at Le Monde who printed his corruption allegations without any supporting evidence. Lemonier, who had been at the newspaper for less than month and had just finished university, interviewed no one at EULEX or any other agency to comment on Simmons’ claims.

Simmons abruptly resigned, rather than face the consequences from the Coalition’s article about his lack of qualifications.

What followed is a classic example of copy-cat, electronic journalism. The Le Monde article was reprinted verbatim by many large media outlets – including the Associated Press, Fox News, Politico, and the Organized Crime and Corruption Reporting Project. None of these outlets made any effort to confirm Simmons’ allegations, nor did they include information from the Coalition’s article.

Simmons’ PR stunt worked. His corruption allegations – though unsubstantiated – drowned out the story about his lack of qualifications. He successfully created a false narrative that his departure was due to corruption at EULEX, rather than the discovery of his questionable background.

Subsequent revelations also have not been widely reported. The Priština-based investigative news outlet Insajderi (Insider) learned Simmons listed on an EU job application that he received a PhD from Fairfax University, a long-discredited “diploma mill” notorious for selling fake diplomas. This discovery has not been picked up by the media outlets that reported the original story.

The Coalition since has obtained Simmons’ job application and has independently confirmed its authenticity. The Coalition also has learned Simmons falsely identified himself as “Dr.” on official court documents.

The EU is investigating several allegations against Simmons, as well as those made by him.

Kocijančič, the EU spokesperson, said an external investigator was appointed in 2016 and a Disciplinary Board headed by former European Court of Justice Judge Kieran Bradley was later empaneled. In late 2017 Bradley issued findings that Simmons did not appeal, suggesting the Board ruled against Simmons.

Kocijančič would not elaborate on the allegations and the disciplinary findings, and would not say whether the allegations include Simmons listing a fake PhD on his job application. “This is an issue that is of a sensitive nature,” she said, adding that two of the four investigations are ongoing. (See Kocijančič’s full interview with the Coalition, below.)

Simmons also picked a losing fight against the agency that originally seconded him to EULEX, the UK’s Foreign and Commonwealth Office. He sued the FCO in the London Employment Tribunal in hopes of being declared a permanent employee and thus gaining protection from being dismissed or replaced. A three-judge panel ruled unanimously against Simmons on December 10, 2017. Simmons’ London-based lawyer, Simon Cheetham, did not respond to several requests for an interview.

The Employment Tribunal’s ruling confirmed the Coalition’s finding that Simmons “has not practiced in the UK as a solicitor for some 16 years.” (See the Tribunal’s full ruling, here.)

It is unknown whether the UK is investigating Simmons for falsely claiming to have a PhD or other issues. A UK government source said he could not release personal information due to the UK’s Data Protection Act. He said that in general, all employees seconded by FCO “are subject to background checks” and that “deliberately making false statements is a potentially serious conduct issue if proven.”

The law as a ‘friendly recommendation’

Torsten Koschinka, currently a District Court judge in Görlitz, Germany, was an international judge at EULEX from shortly after the mission opened in 2008 until 2011. He said he witnessed systemic problems that permeated the institution.

“Many people simply were not personally qualified to work there, especially at the higher levels,” said Koschinka, who served as an appeals judge at the Kosovo Supreme Court. “Some people did not understand the basic requirements of the rule of law. They were not interested in the rule of law. They thought the law was just a friendly recommendation.”

Koschinka’s impressions of the integrity measures within EULEX may explain why Simmons was allowed to sidestep scrutiny for so many years, and why current staff continue to report problems.

“When you raise a concern, they try to quiet you down. They are not interested in identifying whether someone did something wrong. They want to keep things quiet – to sweep things under the carpet,” he said. “If they do make a decision, they often close the case without getting to the bottom it. Only when the media is involved do they even pretend to pay attention.”

“We came there to promote the rule of law, and to bring the rule of law to Kosovo. We really wanted to help,” Koschinka said. “To experience this kind of unprofessionalism – I was completely astonished.”

“The EU and EULEX operate a zero tolerance policy towards allegations of inappropriate behaviour and all Mission members are accountable for their actions. All allegations are investigated and, as appropriate, referred to a Disciplinary Board.

In the case of Mr Simmons, we have been following the Code of Conduct, the relevant framework for such issues, to the letter and will continue to do so.

When allegations were first made against him at the end of 2016, an external investigator was appointed in view of his position as a Judge and his seniority in the Mission, enhancing also the impartiality and neutrality of the investigation. On the recommendation of the President of the European Court of Justice, a retired Judge of ECJ, Judge O’Caoimh, was appointed to lead the investigation.

A Disciplinary Board – led by another former ECJ Judge, Mr Kieran Bradley – deliberated and gave its advice on two of these at the end of last year. This advice was agreed to and communicated to Mr Simmons and to the seconding authority (UK Foreign and Commonwealth Office). Of note, Mr Simmons has not appealed the decision to agree to the advices of the Disciplinary Board.

Two investigations, one on allegations against Mr Simmons and one on those made by him, are ongoing. We continue to call on Mr Simmons to provide data and evidence he refers to in his allegations, but so far he has refused to do so.”

Your ticket for the: Hit and Run: Disgraced Former Kosovo ‘Judge’ Disappears after Alleging EU Corruption