Two years and 443 cases later, a victimized whistleblower in Serbia finally has prevailed in court.

Novi Sad city employee Marija Beretka won her prolonged retaliation case before an Appeal Court on May 22 – nearly two years to the day after she told police that city officials were concealing information about improperly parked vehicles. The ruling also came almost exactly two years after Serbia’s much-praised Law on the Protection of Whistleblowers took effect.

Beretka endured a series of topsy-turvy, sometimes contradictory rulings in several courts before an appeals judge ordered her reinstated to her former position in the city’s Administration for Inspection. She was compensated €810 for “mental pain due to violations of honor and reputation.” A judge banned city officials from committing further reprisals against her.

Passed with great anticipation, Serbia’s whistleblower law – on paper – is one of the strongest in the Balkans, if not all of Europe. But making the law actually work for people who were fired or harassed because they reported misconduct has proven to be tougher than expected.

Though technically a victory, Beretka’s case highlights many problems with the new law and how judges go about interpreting it. Despite being trained on the law, judges in Serbia are far from uniform in how they rule on unfair dismissal and other retaliation cases. Different judges presented with similar fact patterns have handed down entirely different rulings.

Moreover, victimized whistleblowers seeking relief may have to file separate lawsuits in three layers of courts: Basic, High and Appeal. The subtly different and sometimes overlapping roles of each court that has jurisdiction over the law – which the law itself does not explain – adds to the confusion. It also can greatly add to the time and expense of pursuing justice.

Disorder in the Court

Beretka’s Kafkaesque saga began when she confronted Novi Sad city officials with information about irregularities while working as an inspection supervisor in early 2015. That April she was moved to another position against her will. Again she was involuntarily transferred after reporting her concerns to the police on June 5, the very day that the whistleblower law took effect.

She challenged the transfer in Novi Sad Basic Court in July 2015. In September the court ordered her to be reinstated, a decision that the Appeal Court upheld the following December.

Beretka also filed a case in the Novi Sad High Court, seeking a temporary measure to reinstate her while her parallel case proceeded. Contrary to the Basic Court, and working with an identical set of facts, the High Court denied her request. A judge ruled that she failed to prove her transfer was motivated by her making a report to the police, and therefore was not whistleblower retaliation. An Appeal Court upheld the denial in September 2015.

The ruling exposes a major flaw in the law. Contrary to European standards, Serbia’s law places the initial onus on employees to show that adverse employment actions were linked to them having reported misconduct – and not on employers to prove that the actions were not motivated by an act of whistleblowing.

In a later case before the High Court, a judge ruled in April 2016 that the city must reinstate Beretka. This ruling was overturned by an Appeal Court three months later – with a judge ruling, again, that Beretka did not demonstrate the link between her report and her transfer.

She prevailed in yet another High Court ruling in February 2017, which an Appeal Court upheld in May. A judge ruled she was unfairly transferred and should be reinstated and compensated. 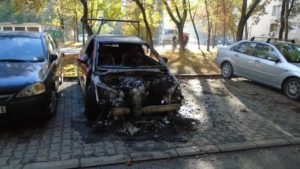 Marking the second such victory in Serbia, Beretka’s colleague Zoran Pandurov won his case before the Novi Sad Appeal Court on July 10, 2017. Pandurov also was transferred to a new job against his will after helping Beretka. He actually received higher compensation: €1,500 for “endured fear” on top of damages to his honor and reputation. Serbia’s new law affords protection to “related persons” such as Pandurov.

Today, Beretka is back at her old job, and the hostility once directed at her by colleagues has passed. She says she has no regrets, despite her two-year ordeal for redemption. Far from a sense of revenge, she magnanimously feels empathy for co-workers who may have harassed her out of fear for their own jobs and livelihoods. “I can’t blame anyone who is afraid,” she said.

Meanwhile, two of her managers themselves have since been transferred. Court proceedings on the irregularities she exposed is underway. Three officials in city’s Administration for Inspection were charged with abuse of office in September 2016, including Beretka’s former supervisor. The next hearing on the charges is scheduled for December 2017.

The Law on Protection of Whistleblowers was passed in 2014 following a long, inclusive and very public effort to establish legal rights for employees who report crime, corruption and other threats to the public interest. The law’s passage was proclaimed a victory for empowering citizen efforts for greater integrity and transparency in public administration.

Fueled by widespread media coverage, 71 cases were filed in Serbian courts within six months of the law taking effect. This jumped to 295 in the whole of 2016, but dropped to 77 cases in the first half of 2017, according to the Supreme Court of Cassation. (See table, below.)

Supreme Court Judge Snežana Andrejević, who helped draft the law, says she is not surprised by the drop in cases but predicts it may rebound. “People are waiting to see what will happen to other whistleblowers,” she said.

One barrier, Andrejević said, is the mentality of people in Serbia who are unaccustomed to seeking protection from public institutions. Rather, she said, many prefer to divulge information to the tabloid media. She also said that after a new law is passed, many people are interested in solving ongoing cases, which may explain the higher numbers in 2016.

Andrejević says the absence of a major whistleblower case thus far “means that people are cautious and do not have enough confidence in court protection of whistleblowers yet, because they do not know enough about it.” Therefore, she adds, the focus should be on educating people who work in institutions – as they are potential whistleblowers – as well as educating those who receive reports and complaints.

Nemanja Nenadić of Transparency International Serbia speculates the drop in 2017 may be because employees are having more success in protecting their rights and solving problems within companies and institutions. Also, he said, managers considering retaliation may be more cautious, and are punishing workers more discreetly and is ways that are more difficult to prove.

Nenadić also speculated that the decline could be due to a drop in corruption reports. “This could be an indirect indicator that the law is not being used enough for its primary purpose: to report illegal and harmful actions,” he said.

The law has proven to be relatively successful, Nenadić said, as evidenced by the dozens of whistleblowers who have received relief in court. Still, he said, the new system has not led to more corruption cases being reported and solved.

Your ticket for the: Justice Delayed – Justice Denied?