Southeast Europe Coalition on Whistleblower Protection > From the Source: Nedim Hadrovic > Milka Tadić-Mijović and the Challenge of the Tendentious Balkan Op-Ed

October 5, 2016
No comments yet
From the Source: Nedim Hadrovic

“No, no, I only won the libel case in Serbia. It’ll be a long time before I win in Montenegro,” Milka Tadić-Mijović tells me with a subtle scoff at the speed at which legal processes unfold in the Balkans.

Tadić-Mijović, who has served in leading editorial positions at local outlets and has written for international ones, is one of Montenegro’s most prominent journalists. She is a top expert on media rights in Southeast Europe, an investigative reporting lecturer and trainer, and was named in Reporters without Borders’ first-ever list of “100 Information Heroes.”

In 2013 she wrote an article that had analyzed a Podgorica conference on media, with particular focus on the fact that liberal Montenegrin outlets Vijesti and Monitor were not welcome and only journalists close to the Đukanović ruling establishment were allowed to be in the room. 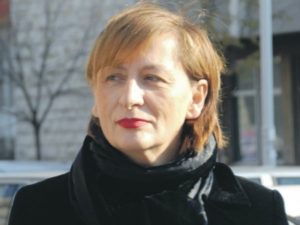 Following this, the Belgrade-based portal e-Novine published an extensive rebuttal piece, fundamentally questioning Tadić-Mijović’s credibility to speak on the matter, while evoking sexist and probing personal overtones. She claims the piece was written in the most traditional form of character assassination based on tendentiously researched and presented information regarding not only her professional but private life.

Vying to clear her name, she filed a defamation lawsuit with the High Court in Belgrade. She won the case this past July, with the court ordering e-Novine to pay her €8,000 in damages for tarnishing her “honor and reputation” by publishing false and insulting information. In Montenegro, she still awaits outcomes on several cases before local courts that she filed against the formerly state-owned outlet Pobjeda.

This leads to a very interesting discrepancy in the way the legality of public lawsuits work in Serbia and Montenegro. “This was largely possible because the judiciary in Serbia, still to a certain extent, operates independently of the ruling party,” Tadić-Mijović says. “In Montenegro, these two couldn’t be closer together.”

Serbia has perhaps by far the highest proportion of legal actions following media publications in the region, partly because any ruling government in the country has had a long tradition of frantically and, often, fatally silencing any oppositional voices. These legal actions come from both sides of the coin, institutional and public, and although do provide an insight into the heightened sensitivity of political or corporate actors to free discourse, also point to the welcome use of courts to settle disputes rather than actual vendettas.

“The sensibilities of readers in the Balkans are such that there isn’t yet a cognizance, and therefore trust, of independent media.”
– Milka Tadić-Mijović

In a region with one of the highest proportion of partisan journalism and media-political cronyism in Europe, I ask her whether organizations such as hers, the Montenegro Center for Investigative Journalism and the weekly Monitor, can contribute to a greater degree of information transparency.

“That’s something that’s very difficult to measure at the moment, and partly because we’re just starting out,” she says. “But also because the sensibilities of readers in the Balkans are such that there isn’t yet a cognizance, and therefore trust, of independent media.”

Tadić-Mijović also attributes this to a structural problem within media itself. “I think, what is happening in the Balkans, is we’ve lost readers as the primary financers of media, and are instead witnessing a complete centralization of journalism,” she points out. “This allows for more complete control over most mainstream outlets.”

To further underline the extent to which watchdogs, NGOs and independent media are impeded in Serbia, even the most fundamental and comparatively minute probing into the workings of government can provoke the most exaggerated response from the very top.

In 2014 Dunja Mijatović, Representative on Media Freedom for the Organization for Security and Co-operation in Europe (OSCE), pointed towards the blocking of Internet sites in Serbia at crucial times. One of these instances was an alleged government-ordered temporary shutdown of a publication that ran a story on a high-ranking minster who had forged his Ph.D. dissertation.

Mijatović issued a statement that these kinds of interventions were becoming commonplace within the current administration. Serbian Prime Minister Vučić was swift and unapologetic in his lengthy and threatening response to Mijatovic, claiming that she had “[launched] a most dirty campaign against him and his…campaigning for freedom and rule of law.”

And although Serbia’s media freedom index has categorically improved since the Milošević regime, citizen advocate Saša Janković maintains that there exists in Serbia an “extraordinarily difficult situation for freedom of expression because of a chain of recent events that, although not on their own dangerous, all in all reflect a concentrated effort to silence all opposition.”

However, Tadić-Mijović’s legal run-ins also provide a different insight into the liberal-independent media, one of immaturity and impetuousness – and of impassioned verbal critiques, even if the authors or journalists in question are well-respected and seasoned – as was the case with the Belgrade publication. Perhaps in the absence of and lack of prospect for a freer media environment, seasoned journalists are now left to their own devices of textual takedowns that, more often than not, needlessly point to details that are unnecessary and detract from the main point.

In spite of all of these challenges, both Janković and Tadić-Mijović invest their hopes in citizen watchdogs and a civil society that is informed and dedicated to the transparency of information, on which the Montenegrin Center for Investigative Journalism continually works.

“We need to prove ourselves in the eyes of the general public, to strengthen our general image by continuing to report in the public interest,” Tadić-Mijović says. Because, she explains, they remain dependent, by and large, on whatever is currently being served to them.

Because by publishing projects such as the Montenegrin Center’s investigation of offshore business and the Buying Up Paradise story the Bosnian Center for Investigative Reporting did in collaboration with the Organized Crime and Corruption Reporting Project, public trust for independent media can be (re)established not just in the Balkans overall, but especially in Serbia and Montenegro – countries where the links between state and public discourse is emphasized tenfold.

And while, in essence, Tadić-Mijović’s words echo a platitude, they are at the moment perhaps the only truism that media in Serbia and Montenegro face.

Your ticket for the: Milka Tadić-Mijović and the Challenge of the Tendentious Balkan Op-Ed