On the Spot: Kosovo Investigative Journalists Honored for Rights Coverage

January 2, 2018
No comments yet
Dispatches

Seventeen years after the last recorded cases of measles were reported in Kosovo, more than 100 people stricken with the illness were lying in a hospital as 2017 came to a close. The death of a 15-month-old baby has drawn sharp attention to low vaccination rates in Fushë Kosovë, a disadvantaged community outside Prishtina with large Ashkali, Egyptian and Roma populations. 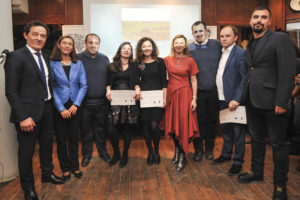 For her in-depth coverage of the crisis, Dafina Halili of Kosovo 2.0 won first prize at an awards ceremony held in Prishtina on December 15. Leonida Molliqaj won second place for “The Men’s Campaign,” published by Preportr. Zeljko Tvrdisic won third place for “The Protection of Women from Violence,” which aired on several TV stations in northern Kosovo.

The Balkan Investigative Reporting Network and the Center for Advocacy for Democratic Culture issued the awards for the three best stories on minority, women’s and LGBT rights. The awards were presented by Kosovo Ombudsman Hilmi Jashari and Netherlands Ambassador to Kosovo Gerrie Willems.

Coalition Co-coordinator Mark Worth and Activism and Outreach Director Kristina Stevancevic were pleased to join the vibrant discussion on human rights and connect with many groups and leaders working on media freedom, whistleblower protection and other concerns.

Your ticket for the: On the Spot: Kosovo Investigative Journalists Honored for Rights Coverage

On the Spot: Kosovo Investigative Journalists Honored for Rights Coverage