Speaking Out, Pushing Back

The Coalition is fighting for the rights of whistleblowers – and winning

by Mark Worth
Coalition Co-coordinator

Whistleblowers throughout Southeast Europe, once alone in their struggle for justice, now have a unified voice speaking on their behalf, and a unified team of campaigners fighting to uphold their rights.

The Southeast Europe Coalition on Whistleblower Protection is working throughout the region to support whistleblowers who face reprisals in the workplace and in the courthouse. We are also advocating for stronger legal rights and protections for whistleblowers, to help ensure they do not suffer retaliation for speaking up while others remain silent.

Our campaigns and initiatives are bearing fruit throughout the region: 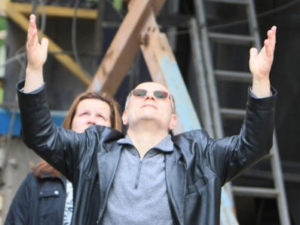 Coalition members and staff led the successful campaign to end the retaliation against Tuzla Kvarc, a family-run mining company that suffered serial reprisals for two years after exposing a government bribery scheme in 2015. The case is among the most shocking in all of Europe in recent years.

The campaign in support of Tuzla Kvarc and its father-and-son management team was led by the Center for Responsible Democracy, a founding Coalition member. Milestones in the campaign include:

The Coalition sent letters of support to Kosovo Prime Minister Isa Mustafa and other government officials on behalf of Murat Mehmeti, a public employee who in November 2016 exposed a massive tax evasion scheme within Kosovo’s Tax Administration. Backed by civil society and the public, Mehmeti remained in his position as of July 2017.

Mehmeti is being supported by Coalition member FOL Movement, which bestowed him with the Award for Civic Courage in December 2016. The tax evasion story was broken by Kosovo office of the Balkan Investigative Reporting Network (BIRN), with which the Coalition cooperates.

The meetings were a collaboration of Coalition Co-coordinator Mark Worth, Coalition member and whistleblower support organization WB o.s., and Czech Senator Libor Michálek, himself a two-time whistleblower. A press conference and public rally are scheduled for fall 2017.

Strengthening whistleblower rights in Czech Republic is essential, as it has among the weakest protections of any EU country. The Czech government and its civil society partners have spent huge amounts of taxpayer money to promote plans to pass a whistleblower law, with nothing to show for it.

GONG, Center for Peace Studies and Human Rights House Zagreb – all Coalition members – have launched new campaigns and initiatives to support whistleblowers and their rights. The efforts include advice and support services, a campaign for Croatia’s first whistleblower protection law, and a public awareness campaign on the value of whistleblowing in exposing and combating corruption.

The groups recently unveiled a new mural to honor whistleblowers painted on the office of Human Rights House Zagreb. The mural was the centerpiece of the groups’ celebration of the first International Whistleblower Day on March 27, 2017.

Moldova passed its first-ever provisions to protect whistleblowers in May 2017, backed by the efforts of three Coalition members: Anticorruption Alliance, Center for Analysis and Prevention of Corruption, and Resource Center for Human Rights (CReDO). The provisions are included in the Law on Integrity developed by Moldova’s National Anticorruption Centerand its Deputy Director Cristina Țărnă, a former anti-corruption activist.

The law is the culmination of a UNDP project in which Coalition Co-coordinator Mark Worth twice visited Chișinău in 2016 for consultations and training with anti-corruption and other government officials.

With support from the Coalition, the Center for Investigative Journalism-SCOOP and the Macedonia chapter of Transparency International (TI) are investigating disclosures and retaliation complaints from whistleblowers, while protecting their identity from would-be retaliators. TI Macedonia played a key role in the passage of the country’s first whistleblower protection law in November 2015. The two Coalition members are now working to ensure that the law is strongly and fairly enforced for the benefit of whistleblowers. 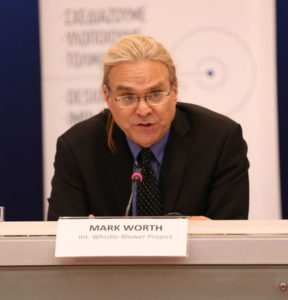 Coalition Co-coordinator Mark Worth speaks at the OECD’s Greece Public Integrity Forum in Athens on July 11, 2017

Coalition Co-coordinator Mark Worth spoke on the importance of whistleblower protection at the first-ever multi-stakeholder Public Integrity Forum in Greece, hosted by the OECD in Athens on July 11-12. With input from the Coalition, the OECD is working with Greek officials to develop the country’s first comprehensive law to protect whistleblowers.

Your ticket for the: Speaking Out, Pushing Back

Speaking Out, Pushing Back