September 7, 2016
No comments yet
Dispatches

by Ana Novaković
Center for Development of Non-Governmental Organizations

PODGORICA – In a rare case of whistleblower retaliation that has boiled to the surface in Montenegro, a hotel employee was fired in June after exposing how a government agency paid the hotel bill for a political party.

The incident, which has become known as “The Invoice,” is being seen in the media as the misuse of public, taxpayer-supported resources to improperly benefit a leading political party. 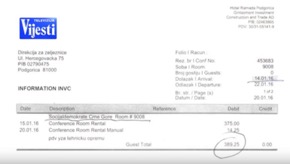 The employment contract of Patricija Pobrić, sales director at the Ramada Hotel in Podgorica, was not renewed after she revealed that Montenegro’s Directorate of Railways paid a €1,000 bill for two conferences held by the Social Democratic Party (Socijaldemokrate Crne Gore). Pobrić sent the incriminating invoice to Parliament Member Mladen Bojanić, who went public with the scandal.

The controversy is fueled by the fact that the Directorate of Railways falls under the Ministry of Transport and Maritime Affairs, whose head, Ivan Brajović, is also the president of the Social Democrats.

Questions remain about why the Ramada Hotel would take action against a whistleblower in a case involving government and political leaders.

Bojanić has sent the evidence to the Prosecutor’s Office, the Agency for Prevention of Corruption and other authorities. So far, Bojanić has received no answers. The Social Democrats and Directorate of Railways have denied wrongdoing.

During a television appearance on June 20, Pobrić said she does not anticipate any support from anti-corruption officials: “I expect very little from the institutions.”

According to media reports, Pobrić has requested whistleblower protection from the Agency for Prevention of Corruption under Montenegro’s new Law on Prevention of Corruption, which took effect in January 2016. The Agency as well as the Prosecutor’s Office reportedly are investigating the situation, including allegations of blackmail involving Bojanić and the Social Democrats.

Political Pressure on a Private Company?

Questions remain as to why the Ramada Hotel in Podgorica, which is affiliated with a private company based in the United States, would take action against Pobrić in a case involving government and political leaders in Montenegro. The Ramada hotel chain is owned by Wyndham Worldwide Corporation, both based in New Jersey. 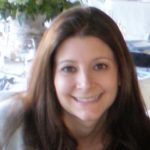 Wyndham Hotel spokesperson Haley Borisoff, who hung up the phone on a Coalition representative

Haley Borisoff, public relations director of Wyndham Hotel Group in London, hung up the phone on a Coalition representative who called the company.

Wyndham legal vice president Jeremy Barker said the company has a franchise agreement with the hotel’s owner and that he could not comment on the situation – or even confirm the name of the owner – because of a confidentiality agreement. “We don’t get involved with individual hiring and firing decisions,” he said, but “we expect all franchisees to comply with the local laws in their country…as guardians of the Ramada brand worldwide.”

The hotel’s owner at the time of the incident was Gintasmont Investment Construction and Trade of Podgorica, a division of Gintas Group, a construction and infrastructure company based in Bursa, Turkey. Gintasmont Executive Director Omer Dogru said, “This case [has been] so much manipulated with wrong information. We do not want to…comment on this subject.”

The Ramada Podgorica is managed by Sophos Hotels of Lausanne, Switzerland. Its president, Fernand Donnet, said his company is “not involved in the daily business” of the hotel and “would not have any political involvement in any of its properties.” He acknowledged, however, that the case is “political.” Donnet would not say who decided not to renew Pobrić’s contract, what the official reason was for her dismissal, or whether the decision was made before or after she disclosed the suspicious payment.

The hotel is part of the Mall of Montenegro, which opened in 2010. As part of a public-private partnership, Gintasmont invested €15 million in the complex, while the city of Podgorica and the World Bank’s International Finance Corporation put up €11 million and €10 million, respectively.

The mall and hotel were sold to Stockholm-based investor Savana Holding AB for €24 million, according to media reports on July 25. This is €12 million lower than the original construction cost.

Your ticket for the: ‘The Invoice’: Whistleblower in Montenegro Sacked after Exposing Questionable Government Payment