Gjorgji Lazarevski spent 11 months in prison – most of it in solitary confinement – as retribution for exposing the illegal wiretapping of thousands of political opponents by the government of Macedonian Prime Minister Nikola Gruevski. 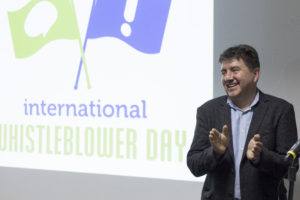 Today, Lazarevski is free – and Gruevski is out of a job.

Lazarevski smiled as he walked to the podium to accept the award from staffers from the Southeast Europe Coalition on Whistleblower Protection. Lazarevski spoke from the heart about his experiences as a national hero who was victimized for what he did:

“I have no doubt that all the hardship that we and our families suffered, and still suffer, wasn’t in vain – compared to the worth of our achievements. We provided material evidence that corruption was the main source of power for the autocracy in Macedonia.”

“The burden of staying silent is heavier than any consequence of making a report.”

“Zvonko and I had to make a choice: to ignore it, or to fight it,” Lazarevski said. “We could take the sweet pill of keeping our mouths shut, or the bitter pill which might kill us both, but that also could cure society. I am confident that we made a right choice. I believe no authority can ignore or silence the citizens anymore. The whole region and the world witnessed the detonations of truth in Macedonia and power of the public voice.” 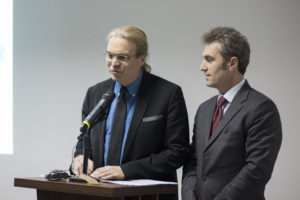 “On this day, I want to address every person who is in a dilemma similar to the one Zvonko and I faced. Report it. Take the bitter pill. Staying silent might keep you safe, but in your heart, you will know that you were actually an accomplice. The burden of staying silent is heavier than any consequence of making a report. Zvonko and I don’t have that burden. We did what was right for our conscience and for our country. No justice – no peace.”

While colleagues at the Macedonian Office for Security and Counterinteligence, Lazarevski and Kostovski worked for three years to document the illegal wiretapping of 20,000 public officials, businessmen, activists, journalists and other people viewed with suspicion by Gruevski.

Their revelation of the mass-scale surveillance in 2015 shocked the nation and made international headlines. The exposure led to Gruevski’s resignation, new elections in 2016, the formation of a new government in 2017, and the indictment of 94 people and seven companies. 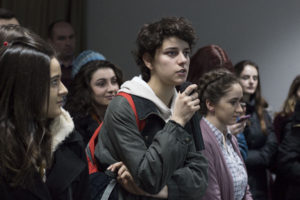 Lira Hasani (center) and other journalism students from the University of Prishtina participate in the International Whistleblower Day press conference in Prishtina, 24 April 2018. Photo: Elion Misini

The Free Speech Award is presented annually by the Southeast Europe Coalition on Whistleblower Protection and the European Center for Whistleblower Rights. The two groups cooperated with local activists, journalists and universities to organize International Whistleblower Day and Kosovo Free Speech Week from 19-24 March.

The award ceremony generated high-profile media coverage, including on the national news program Jeta në Kosovë and news portals Kallxo and Prishtina Insight in Kosovo, and on two editions of the 360 Degrees news program in Macedonia.

The next day, an evening-long party hosted by actor Armend Baloku was thrown at the Prishtina landmark Hamam Jazz Bar. 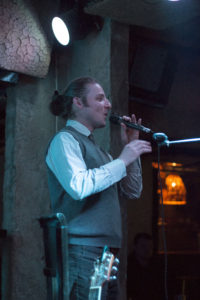 The party featured Citizen Speak-Up, highlighted by an impassioned speech by Elion Kollçaku, a journalism student and publications editor at the University of Prishtina. In the Name That Whistleblower contest, audience members were challenged to identify prominent whistleblowers from recent years. The evening was capped by energetic performances by singer/guitarist Tanju Şerif and the Crossroad Blues Band.

Earlier in week, University of Prishtina Professor Remzie Shahini-Hoxhaj invited Coalition Co-coordinator Mark Worth to discuss whistleblowing and other free speech issues with her Media Ethics class. Many of Shahini-Hoxhaj’s students participated in the press conference that followed the awards ceremony.

Also during the week, Worth and Coalition staffer Kristina Stevancevic met with Deputy Prime Minister Enver Hoxhaj, EU officials and other policy-makers to discuss the need to strengthen Kosovo’s ineffective and outdated whistleblower protection law.

International Whistleblower Day is the day each year – 24 March – when the world honors citizens who have the integrity and courage to report misconduct while others remain silent. It also provides citizens with the opportunity to report crime, corruption and public health threats via safe and confidential online portals.